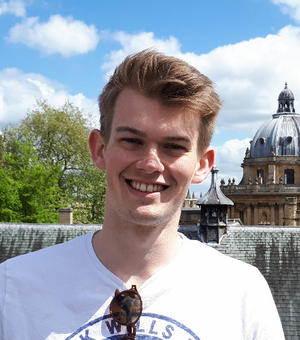 Edward gained his undergraduate degree in Physics at the University of Bath and completed a EUROfusion research studentship using the Wendelstein 7-X fusion reactor at the Max-Planck institute. In 2017, he started a DPhil in Materials Science partnered with EDF energy. His main research aim is to understand factors that influence SCC in nickel based austenitic alloys in PWR applications, focusing on the effects of hydrogen. This is a topic of significant interest to the nuclear industry, as it will help extend reactor lifetimes and to help meet the increasing demand of electrical power. Edward utilises micromechanical testing to probe the degradation of mechanical properties of materials that have been saturated with hydrogen. The addition of FIB preparation allows a high magnification characterisation of the experiment to be completed. Using these highly localised testing and imaging techniques it is hoped to find evidence to support hydrogen-based theories of SCC. He uses various testing techniques such as nanoindentation and microcantilever testing, alongside electron microscopy techniques such as TEM and SEM.

Development in FIB prepared micromechanical tests and desktop computational power has seen an overlap of experimental and simulation length-scales. Edward is currently working alongside Prof Edmund Tarleton (Department of Engineering) on the hydrogen embrittlement in metals initiative, to simulate micromechanical tests and the observed effects of hydrogen using finite element analysis. The expertise of Prof Tarleton has enabled other simulation-based projects of SCC to be conducted which is of growing interest within the group.